Thursday I received a text that said “did Raven reach out to you?” I didn’t think much of it, maybe some family drama. I simply replied “no about what?” The next five words made my heart sink, “her father died last night.” I picked up my phone to make a call I never wanted to make: to welcome my pure-hearted, genuine spirited, kind cousin to a club she never wanted to join. She answered the phone, strong, “holding it together.” What she didn’t know was that I was a mess. You all know my relationship with crying. When I say, I was broken down on that phone call. (Of course I hid my tears from her) My heart hurt for her. As I tried to explain that the studies were wrong, there may be five stages (sometimes seven) of grief but you don’t experience them in a particular order, you bounce around them. And the truth is, you don’t start healing once the body is buried or cremated. You have to be intentional with your healing and sometimes the denial/avoidance stage is the longest.

It will be two years in October that my dad has been gone. The truth is, I just began moving out of the denial stage. I literally got back to Houston after his funeral and picked up two more jobs, that I really didn’t need. I started studying for the GMAT. I filled my time up completely to avoid dealing with the reality that I will never see my father again. I was “okay.” I kept it together. I was slaying this grief thing. I remember my friend Jasmine Lott, whose father passed in 2012 texted me that “I’m here to tell you it never goes away. The pain the tears. I still wake up crying. It’s like it happened yesterday. Keep praying and crying wake up and just live your life that’s all you really can do.” I remember the feeling I felt when I read that text. It was so sad and morbid and I was in denial so I was like “Nah that won’t be me.” …Then I lost control. First, I started crying in inappropriate places. Then, I started acting out. (All things JLott had warned me about) I went numb, but thing causing the pain was a reality. 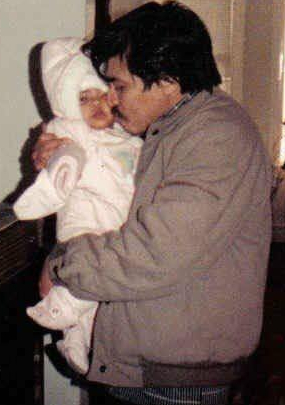 Raven and Her Dad

I tried to explain all this to Raven by simply saying “It’s a process and the best thing you can do is to deal with everything you are feeling.” I know what she is about to go through and that breaks my heart. Everyone’s grief is different, yet the same. Raven’s father was a Mexican native who was deported when she was a baby. She was just beginning to build a relationship with him and was robbed of that because someone took his life. That is an additional level of grief and trauma to deal with. (Honestly, at this point I am thinking to myself, Christina this is some sad ish, you need to make this post positive girl.) Truth is Father’s Day is not Happy for a group of people. Maybe life will turn around to make it a happy period for us that feel grief. Maybe we will have a child born on Father’s Day Weekend or some other positive life event. But for now, for me, for Raven who lost her dad the Tuesday before Father’s Day….it just ain’t that happy.

Ironically enough, my Soror Melanie made a Facebook post on Friday sharing that she had not spoken to her father since she was 19 and this year decided to reach out for Father’s Day and learned that he had passed. Raven and Melanie were robbed of something that I will never personally understand but I can definitely empathize with. So where’s the positivity in this post, that you all have support. Jasmine Lott was my support. She was the one person who could say anything to me and I would not get offended because I knew that she knew EXACTLY how I felt. (Our relationships with our fathers were extremely similar, even their deaths were similar) I also had support from those I had not been previously close with. An old co-worker Jessica Cain gave me so much support in an exchange in Facebook messenger. And my friend Stevie. Stevie and I will be spending Father’s Day together moving forward, celebrating the lives and legacies of our amazing fathers.

I am a Grey’s Anatomy fanatic. And I share the same morbid humor and sentiments of the writers of the show. When the character George’s father died, Cristina Yang said to him, “There’s a club. The Dead Dads Club. And you can’t be in it until you’re in it. You can try to understand, you can sympathize. But until you feel that loss… My dad died when I was nine. George, I’m really sorry you had to join the club.” George replied, “I… I don’t know how to exist in a world where my dad doesn’t.” Cristina then said, “Yeah, that never really changes.”

I am really sorry you have to join the club, but please know you have support.